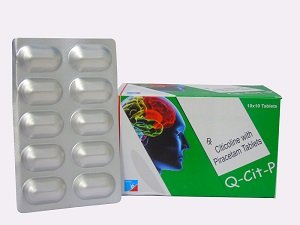 CITICOLINE also is known as cytidine diphosphate-choline (CDP-Choline) is a psychostimulant/no tropic. It is an intermediate in the generation of phosphatidylcholine from choline.

PIRACETAM is a drug that enhances cognition and memory, slows brain aging, increases oxygen and blood flow to the brain, improves Alzheimer’s and aids in stroke recovery and related conditions.

PIRACETAM: – The drug interaction potential resulting in changes of piracetam pharmacokinetics is expected to be low because approximately 90% of the dose of piracetam is excreted in the urine as unchanged drug.