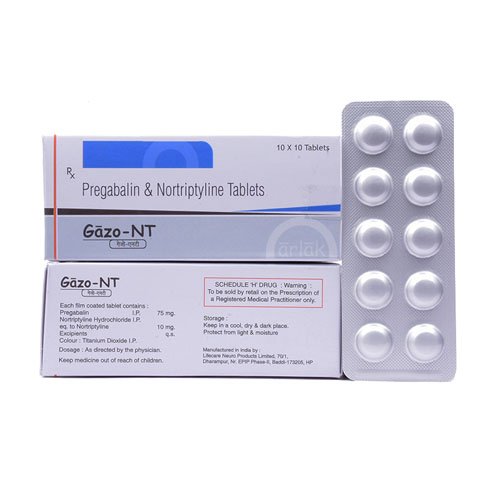 Pregabalin belongs to group of medications called antiepileptics. It acts by modifying the release of certain substances released by the nerves in the brain (neurotransmitters) to restrict the transfer of pain signals between nerves, thereby reducing pain caused by damage to the nerves, as well as symptoms of fits (seizures).

Nortriptyline is used in the treatment of depression

Nortriptyline belongs to class of medication called as tricyclic antidepressant. It acts by increasing the level of chemicals (nor epinephrine, serotonin) that is required for normal brain function.

Binds to alpha2-delta subunit of voltage-gated calcium channels within the CNS and modulates calcium influx at the nerve terminals, thereby inhibiting excitatory neurotransmitter release including glutamate, norepinephrine (nor adrenaline), serotonin, dopamine, substance P, and calcitonin gene-related peptide .Although structurally related to GABA, it does not bind to GABA or benzodiazepine receptors. Exerts antinociceptive and anticonvulsant activity. Pregabalin may also affect descending noradrenergic and serotonergic pain transmission pathways from the brainstem to the spinal cord.