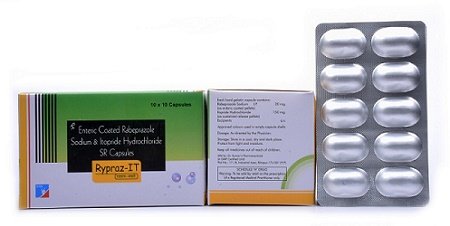 Rabeprazole is a PPI that suppresses gastric acid secretion by inhibiting the gastric H+/K+ ATPase at the secretory surface of the gastric parietal cell.

Pharmacodynamics: – Rabeprazole sodium is a proton pump inhibitor. It is a prodrug. After administration it diffuses in to the parietal cell of the stomach and accumulates in the secretory canaliculi. In the acidic medium Rabeprazole is converted to sulfenamide. This sulfenamide covalently interacts with sulfhydryl (SH) group in the proton pump (H+ K+ATPase) and inhibits the exchange of extracellular K+ for intracellular H+ ion. Rabeprazole sodium irreversibly inhibits proton pumps activity and decreases gastric acid secretion. Rabeprazole produces fastest acid suppression and helps in mucin synthesis.

Absorption: Rabeprazole sodium is well absorbed after oral administration and its bioavailability is about 50% since it undergoes first pass metabolism.

Distribution: It is widely distributed in the body in protein bound form.

Metabolism: Rabeprazole sodium is extensively metabolised in the liver.

Excretion: It is excreted mainly in the urine and small amount in feces.

Absorption: it is orally well absorbed after oral administration.