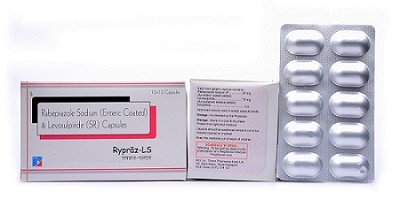 1.) Rabeprazole: – Rabeprazole belongs to a class of anti secretory compounds (substituted benzimidazole proton-pump inhibitors) that do not exhibit anticholinergic or histamine H2-receptor antagonist properties, but suppress gastric acid secretion by inhibiting the gastric H+/K+ATPase (hydrogen-potassium adenosine triphosphatase) at the secretory surface of the gastric parietal cell. Because this enzyme is regarded as the acid (proton) pump within the parietal cell, rabeprazole has been characterized as a gastric proton-pump inhibitor. Rabeprazole blocks the final step of gastric acid secretion. In gastric parietal cells, rabeprazole is protonated, accumulates, and is transformed to an active sulfenamide. When studied in vitro, rabeprazole is chemically activated at pH 1.2 with a half-life of 78 seconds.

2.) Levosulpride: – Levosulpiride is more selective and acts primarily as a dopamine D2 antagonist. The prokinetic effect of Levosulpiride is mediated through the blockade of enteric (neuronal and muscular) inhibitory dopamine D2 receptors. Results also show that levosulpiride also acts as a moderate agonist at the 5-HT receptor. The serotonergic (5-HT4) component of Levosulpiride may enhance its therapeutic efficacy in gastrointestinal disorders. This property, together with antagonism at D2 receptors, may contribute to its gastrointestinal prokinetic effect.

Route of Elimination: Following a single 20 mg oral dose of 14C-labeled rabeprazole, approximately 90% of the drug was eliminated in the urine, primarily as thioether carboxylic acid; its lucuronide, and mercapturic acid metabolites.

Absorption: Oral bioavailability is about 30%; peak plasma concentrations after about 3hr.