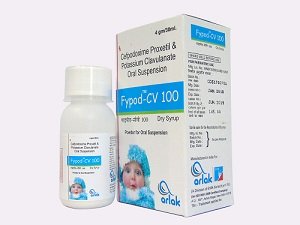 Cefpodoxime Proxetil USP is an orally administered, extended-spectrum, semi-synthetic antibiotic of the cephalosporin class. Cefpodoxime Proxetil is a prodrug that is absorbed from the gastrointestinal tract and de-esterified to its active metabolite, cefpodoxime.

MECHANISM OF ACTION: Cefpodoxime, a third-generation semi-synthetic cephalosporin, exhibits activity against several gram-positive as well as gram-negative microorganisms. This compound is also stable in the beta-lactamase environment. Cefpodoxime exhibits exceptional activity against methicillin susceptible staphylococci, streptococcs pneumonia, haemophilus influenza, nesseria spp, and moxaxella catarrhalis, which are referred to as the most common hospital-acquired and community-acquired infections. Clavulanic acid is a natural inhibitor of beta-lactamase, which is produced by streptomyces clavuligerus. It binds to beta-lactamase moieties and inactivates them, thus restricting the cefpodoxime destruction. Clavulanic acid has very little antimicrobial activity.