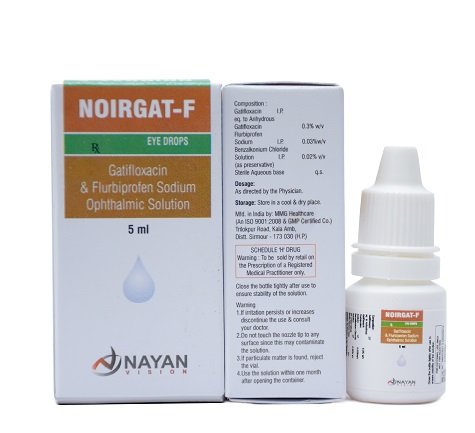 GATIFLOXACIN 0.3% W/V Gatifloxacin is a synthetic broad-spectrum 8-methoxyfluoroquinolone antibacterial agent for oral or intravenous administration.It is bactericidal and its mode of action depends on blocking of bacterial DNA replication by binding itself to an enzyme called DNA gyrase, which allows the untwisting required to replicate one DNA double helix into two. Notably the drug has 100 times higher affinity for bacterial DNA gyrase than for mammalian. Gatifloxacin is a broad-spectrum antibiotic that is active against both Gram-positive and Gram-negative bacteria. It should be used only to treat or prevent infections that are proven or strongly suspected to be caused by bacteria. FLURBIPROFEN 0.03% W/V It is used in fever, headache. It is a non-steroidal anti-inflammatory drug (NSAID). It works by blocking the release of certain chemical messengers that cause fever, pain and inflammation (redness and swelling). It may also be used to inhibit constriction of the pupil during eye surgery.