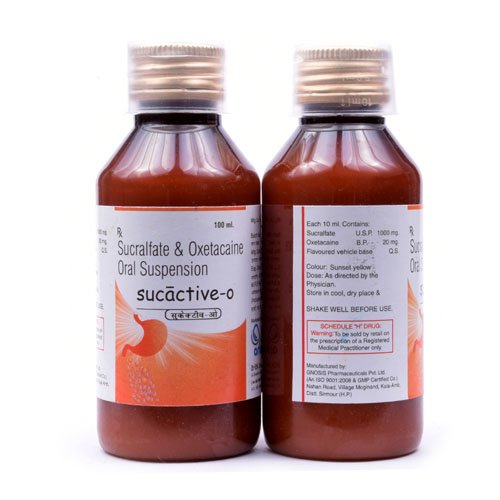 Sucralfate is a locally acting substance reacts with hydrochloric acid in the stomach to form a cross-linking, viscous, paste-like material capable of acting as an acid buffer after a single dose. It also attaches to proteins on the surface of ulcers, such as albumin and fibrinogen, to form stable insoluble complexes. These complexes serve as protective barriers at the ulcer surface, preventing further damage from acid, pepsin, and bile. Thus acts as anti-ulcerant.

Oxetacaine is a local anesthetic of the amide type. It produces a reversible loss of sensation by preventing or diminishing the conduction of sensory nerve impulses near the site of its application.

It also decreases the permeability of the nerve cell membrane to sodium ions by membrane stabilising effect. Relieves pain, bloating, discomfort and fullness.

Sucralfate / Oxetacaine is used for the treatment, control, prevention, & improvement of the following diseases, conditions and symptoms: