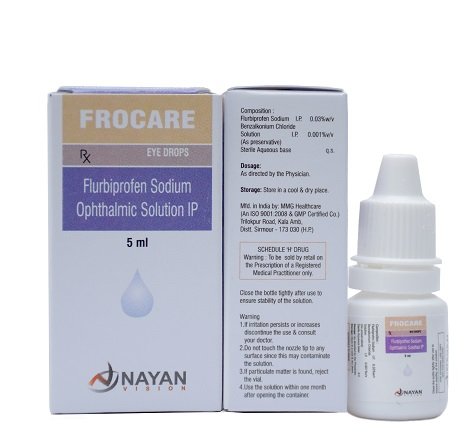 Flurbiprofen Sodium Ophthalmic Solution USP, 0.03% is a sterile topical nonsteroidal anti-inflammatory product for ophthalmic use. Flurbiprofen is a non-steroidal anti-inflammatory drug (NSAID) used in the eye to treat or prevent inflammation of the eye (uveitis). It may also be used to inhibit constriction of the pupil during eye surgery. MECHANISM of ACTION: – Similar to other NSAIAs, the anti-inflammatory effect of flurbiprofen occurs via reversible inhibition of cyclooxygenase (COX), the enzyme responsible for the conversion of arachidonic acid to prostaglandin G2 (PGG2) and PGG2 to prostaglandin H2 (PGH2) in the prostaglandin synthesis pathway. This effectively decreases the concentration of prostaglandins involved in inflammation, pain, swelling and fever. Flurbiprofen is a non-selective COX inhibitor and inhibits the activity of both COX-1 and -2. It is also one of the most potent NSAIAs in terms of prostaglandin inhibitory activity. PHARMACOKINETICS:- • ABSORPTION: – Fluribiprofen is rapidly and almost completely absorbed following oral administration. Peak plasma concentrations are reached 0.5 – 4 hours after oral administration. • PROTEIN BINDING: – > 99% bound, primarily to albumin. Binds to a different primary binding site on albumin than anticoagulants, sulfonamides and phenytoin. • METABOLISM: – Hepatic. Cytochrome P450 2C9 plays an important role in the metabolism of flurbiprofen to its major metabolite, 4’-hydroxy-flurbiprofen. The 4’-hydroxy-flurbiprofen metabolite showed little anti-inflammatory activity in animal models of inflammation. • ROUTE of ELIMINATION: – Flurbiprofen is poorly excreted into human milk. Following dosing with flurbiprofen, less than 3% of flurbiprofen is excreted unchanged in the urine, with about 70% of the dose eliminated in the urine as parent drug and metabolites. Renal elimination is a significant pathway of elimination of flurbiprofen metabolites. • HALF-LIFE: – R-flurbiprofen, 4.7 hours; S-flurbiprofen, 5.7 hours INDICATIONS: – This medication is used before certain types of eye surgery (such as cataract removal). It prevents the pupil of the eye from narrowing. This effect makes it easier for the doctor to examine the inside of the eye, to remove the cataract, and to replace it with a new lens. Flurbiprofen belongs to a class of drugs known as nonsteroidal anti-inflammatory drugs (NSAIDs).