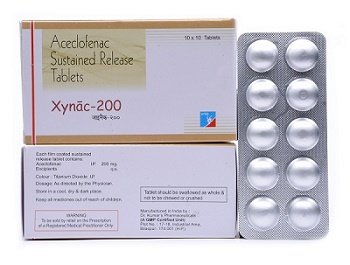 Aceclofenac is a non-steroidal anti-inflammatory drug (NSAID) analog of Diclofenac. It is used for the relief of pain and inflammation in rheumatoid arthritis, osteoarthritis and ankylosing spondylitis.

Absorption: – After oral administration, aceclofenac is rapidly and completely absorbed as unchanged drug.

Elimination: – The mean plasma elimination half-life is around 4 hours. Aceclofenac is highly protein- bound (>99%). Aceclofenac circulates mainly as unchanged drug. 4′- hydroxyl-aceclofenac is the main metabolite detected in plasma. Approximately two- thirds of the administered dose is excreted via the urine, mainly as hydroxyl-metabolites.
No changes in the pharmacokinetics of aceclofenac have been detected in the elderly.